“Stuckie”, the hunting dog was found inside a tree trunk 20 years after it got trapped inside while chasing a raccoon. It was a shocking find for the loggers, who were planning to cut the tree into pieces.

A team of loggers from The Georgia Kraft Corp. were cutting off the top of a chestnut oak tree to load it into a transport truck in 1980 when they came across an unusual sight.

They discovered a white and brown dog staring at them from the hollow space in the log. The dog’s body was exceptionally well preserved, despite the fact that no Egyptian mummification techniques were used to preserve him.

It was approximately 1960 when the hunting dog ran into a hole at the bottom of a tree and shimmed 28 feet up, and the loggers arrived about 20 years later to save the canine from his unfortunate fate. “Because he’s a hunting dog, we assumed he was chasing something in the tree.” Southern Forest World’s owner, Bertha Sue Dixon, told Newsweek.

However, the higher the dog climbed, the narrower the tree became, and the dog became trapped. He was never able to catch its prey, and no one noticed him inside the trunk. He was unable to escape on his own and remained in the unintentional trap, and the dog died as a result of being unable to turn around. When the loggers discovered him, all that remained was a dried, mummified hound, petrified in an endless struggle to escape.

But the question remains as to how the dog’s body remained preserved for so long in the absence of an Egyptian mummification technique. The simple answer is that the properties of his wooden tomb did the work.

When a human or animal dies, the biological mechanisms that keep microbes under control are normally disrupted, leaving the body’s microbes unchecked. In the absence of normal guardians, they begin to eat the body, and the microorganisms in the gut begin the process of putrefaction.

“They grow, they reproduce, and they start taking over the body,” Kristina Killgrove, a biological anthropologist at the University of West Florida who studies decay in humans explained how the tree itself dry preserved the dog.

She further added, “That’s the disgusting part, the body bloats and decays, and bacteria, fungi, insects and other animals come to eat the remains.”

But the tree Stuckie was stuck in, prevented anything like this to happen, the chestnut oak became his coffin. It contains tannin, which is used to tan animal pelts and keeps them from decaying. Tannin is a material that dries out the surrounding and retains moisture, or a natural “desiccant.” It provided relatively dry conditions as oak’s tannic acid, helped to harden the animal’s skin.

Dixon explained that the position and the shape of the tree and the wind blowing upwards also helped Stuckie stay undetected for so long. It had like a chimney effect, (The movement of air into and out of buildings, chimneys, flue-gas stacks, or other containers caused by air buoyancy is known as the chimney effect. Buoyancy occurs as a result of a difference in indoor-to-outdoor air density caused by temperature and moisture variations).

Because of the air flowing in and out of the tree, animals were unable to detect a dead flash inside the tree.

“People always ask me, How did he get in there? And I always say, well he was a hound dog. Maybe he was after a raccoon.” Brandy Stevenson, Forest World’s manager told Roadside America.

The loggers took the mummified puppy to the museum after discovering it. Stuckie, the mummified dog whose name was chosen in a naming contest in 2002, is on display at Waycross, Georgia’s Southern Forest World Museum and Environmental Center.

If you liked reading about Stuckie the dog, check out The 18,000-Year-Old Frozen Puppy Leaves Scientists Puzzled 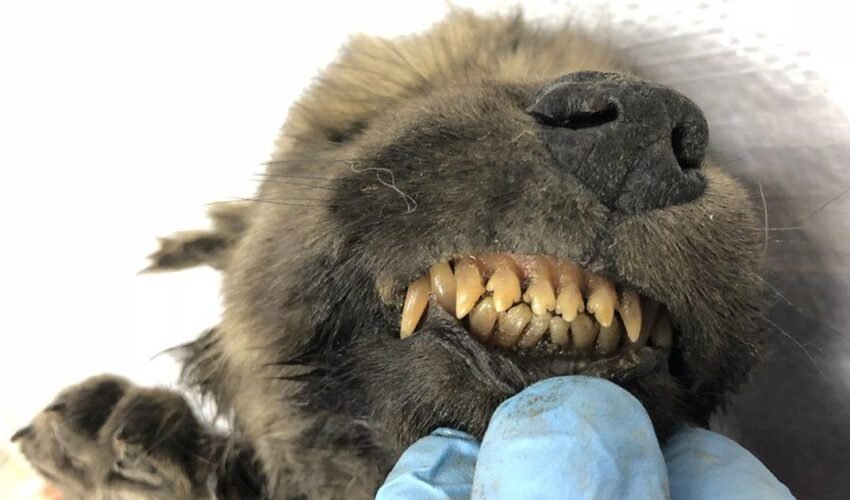