Lyuba who died around 42,000 years ago was 30-35 days old at the time of death, weighed 50 kg, and was the size of a large dog. She was formerly the most complete and well-preserved woolly mammoth ever discovered; scientists even discovered her mother’s milk in her stomach.

Lyuba would have grown to more than three meters in height and five tonnes in weight if she had lived a full mammoth life of 60 years. She would have needed up to 180 kilograms of grass and 80 liters of water per day to maintain her body weight.

Lyuba(meaning ‘love’ in Russian) was discovered by Yuri Khudi and his three sons in Russia’s Arctic Yamal Peninsula in May 2007. Khudi recognized that Lyuba was a mammoth carcass and that it was a significant find, but he refused to touch the mammoth because their beliefs associated touching mammoths with bad omens.

Khudi traveled 150 miles to consult with his friend, and together they informed the local museum director about the mammoth carcass. The directors arranged for Khudi and his friend to be flown back to the location where they discovered the carcass. However, by the time they arrived, Lyuba’s remains had vanished; someone else had arrived first.

Khudi suspected that whoever handled such a thing would make a tidy profit. His suspicions were correct, and he was right about one of his own cousins. Soon after searching the village, they discovered the little mammoth propped up against the wall of a store, where people were snapping photos with their phones.

The shop owner had purchased the mammoth from Khudi’s cousin in exchange for two snowmobiles and a year’s supply of food. The authorities were soon able to reclaim the infant with the assistance of local police.

How did Lyuba die?

Lyuba was discovered in remarkably well-preserved condition, with her eyes and trunk intact and some fur still on her body. Her organs and skin are both in excellent condition. She is thought to have suffocated by inhaling mud while struggling in the deep mud that her herd was crossing at the time.

Lyuba’s body has been colonized by lactic acid-producing bacteria after her death, preserving her in near-perfect condition. The scientists were able to identify milk from her mother in her stomach and fecal matter in her intestine.

They also discovered dung fragments inside her stomach, implying she ate her mother’s dung. Baby elephants still do this because the dung contains bacteria that aid in the digestion of food. The fecal matter may have been eaten by Lyuba to promote the development of the intestinal microbial assemblage necessary for the digestion of vegetation.

Lyuba general appearance and the healthy hump of fat on the back of her neck suggested that he had been in excellent condition at the time of her death, The only flaw in Lyuba’s pristine appearance was a dent in her face, just above her trunk. By examining her teeth, researchers hope to learn more about what caused Ice Age animals, such as mammoths, to become extinct.

Many woolly mammoths have been discovered over time, but Lyuba was a different story entirely. “When I saw her, my first thought was, Oh my goodness, she’s perfect, even her eyelashes are there! It looked like she’d just drifted to sleep.” Dan Fisher, a soft-spoken, 62-year-old paleontologist said.

Lyuba’s discovery could shed new light on a critical period in a mammoth’s life: Since the milk tusks grow from early in gestation to around the time for the birth. The time in the womb (estimated to be 22 months based on an elephant’s gestation length), followed by birth.

The moment of birth, a traumatic event for any mammal is recorded in tooth microstructure by a distinct neonatal line. The scientists initially estimated her death age to be four months by comparing her milk tusk development to that of elephants. The age would be much more accurate if the increments of ivory laid down after the neonatal line were counted.

Fisher was curious of how such an amazing healthy young life had been cut short and whether it had anything to do with the dent in her face? Tissue samples from Lyuba were sent to the Netherlands, where carbon-14 dating revealed that she had died over 40,000 years ago.

In December 2007 Lyuba was transported to Japan to undergo a CT scan, by Naoki Suzuki of the Jikei University School of Medicine. The test confirmed that her skin, teeth, and soft tissues were undamaged, and her internal organs seemed largely intact.

While the end of her trunk, her throat, mouth, and windpipe were found filled with dense sediments. Which suggested that she died by asphyxiation in mud. The mud was so thick that it became clogged in their trachea, which they were unable to dislodge by coughing. It prevented them from taking another breath.

“It moved straight into her trachea and bronchi, and by then she was too exhausted to clear her airway,” Fisher explained “It was only a matter of minutes before she would have passed out.”

However, Lyuba’s incredible condition appeared strange when Fisher visited the Yuribey River, where Lyuba was discovered. It was assumed that Lyuba had been frozen in a block of permafrost that had collapsed into the water during the previous thaw, floated downstream, and come to rest on the sand bar after the river had briefly risen to that level.

The only issue was that Yuri Khudi and his sons had discovered her there in May 2007 before the spring ice had melted. It’s unclear how she got out of the permafrost and settled down for nearly a year during the ice melt in 2006.

“She’d have been lying on this riverside all that time,” he said to his colleague, “including an entire summer exposed to the sun. So why hasn’t she decomposed or been scavenged?”

Fisher discovered that the mammoth’s teeth were not held in their sockets by the usual connective tissue and that her muscles had separated from the bone in places where they should have been firmly bonded. Fisher had a revelation at the end of the autopsy about how Lyuba did not rot.

Lyuba had literally been pickled after her death, which kept her body from rotting when it was exposed thousands of years later. The lactic acid produced by the microbes could also have caused the unusual bone distortion and muscle separation observed by Fisher during the autopsy, and could even have encouraged the formation of vivianite crystals by liberating phosphate from her bones. 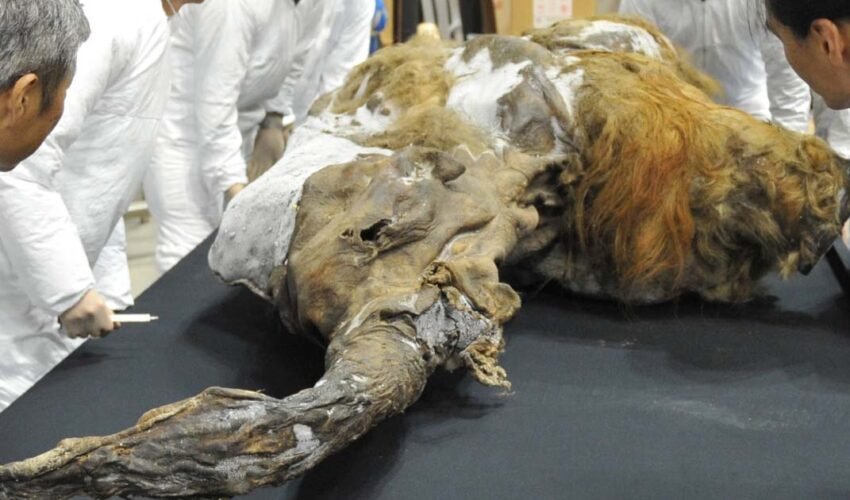