This ancient Book of the Dead scroll, discovered recently in Egypt’s Saqqara necropolis, isn’t bound in human skin like the infamous Necronomicon from the Evil Dead films, but it does serve as a chilling guide to the afterlife.

A team of archeologists led by D, Zahi Hawass have unearthed a cache of treasures at the 4,200-year-old funerary temple belonging to Queen Nearit, next to the pyramid of her husband pharaoh Teti, who ruled Egypt from approximately 2323 B.C. to 2291 B.C.

The temple dedicated to Queen Nearit is made of stone, with three mud-brick warehouses on the southern side where offerings to the queen and her husband were kept.

The treasure also includes more than 50 wooden sarcophagi, a Senet board game, a riverboat with rowers, wooden masks, a statue of Ptah-Sokar-Osiris, and a burial sanctuary dedicated to an Old Kingdom queen, in addition to the 13-foot-long ‘Book of The Dead’ scroll depicting paths to the netherworld of the deceased.

These expansive burial grounds exist in what was once the capital of ancient Egypt, Memphis.

The coffins, which appear to date from the New Kingdom era (1570–1069 B.C. ), were discovered in 52 burial shafts measuring 33 to 40 feet deep by Egyptologist Zahi Hawass and his colleagues. The sarcophagi are adorned with paintings of ancient gods and excerpts from the Book of the Dead, which was thought to aid the deceased in navigating the afterlife.

According to Hawass, researchers began excavating the site in 2010, which is next to the pyramid of King Teti, the first of the Old Kingdom’s Sixth Dynasty rulers (2680–2180 B.C.). However, the team couldn’t find a name inside the pyramid to tell us who owned it.

Book of the dead

One of the most fascinating objects found in the burial shafts is a 13-foot-long papyrus that contains chapter 17 of the Book of the dead, a manuscript used by ancient Egyptians to assist the deceased in their journey through the afterlife.

The name of the papyrus’s owner, Pwkhaef, is written on it. This identical name was also found written on one of the wooden coffins and on four shabti figurines meant to serve the deceased in the afterlife.

Other copies of Chapter 17 contain a series of questions and answers — a sort of cheat sheet for people trying to navigate the afterlife. The newly discovered copy of Chapter 17 may or may not have the same question-and-answer format.

According to Dr. Hawass, this was the first time such a long papyrus had ever been discovered inside a burial shaft.

According to Owen Jarus of Live Science, the coffins discovered in the burial shafts likely hold the remains of followers of a Teti-worshipping cult formed after the pharaoh’s death. Experts believe the cult existed for over 1,000 years, and members would have considered it an honor to be buried alongside the king.

These discoveries will rewrite the history of this region, particularly during the New Kingdom’s 18th and 19th dynasties, when King Teti was worshipped and the citizens were buried around his pyramid.

Saqqara, a vast necropolis of the ancient Egyptian capital of Memphis that has become a UNESCO World Heritage Site, is home to more than a dozen pyramids, ancient monasteries, and animal burial sites.

The sealed wooden coffins, which were unveiled alongside statues of ancient gods, dated back over 2,500 years and belonged to top officials of Ancient Egypt’s Late and Ptolemaic periods. Khaled al-Anani, the minister of antiquities and tourism at the time, predicted that “Saqqara has yet to reveal all of its contents.”

The archaeological team discovered a stela belonging to a man named Khaptah, who was the overseer of the pharaoh’s military chariot, and his wife, Mwtemwia, inside the burial shafts. The top half of the stela depicts the couple paying homage to Osiris, the Egyptian god of the underworld, while the bottom half depicts the couple seated on chairs in front of six of their children. Their three daughters are seated, smelling lotus flowers, while their three sons are shown standing.

A bronze ax, board games, Osiris statues, and several mummies were discovered in the burial shafts near the pyramid, including the mummy of a woman who appears to have suffered from familial Mediterranean fever, a genetic disorder that causes recurring fever and inflammation of the abdomen, joints, and lungs.

Near the burial shafts, there was also a shrine dedicated to Anubis, the god of the cemetery, as well as statues of the god. 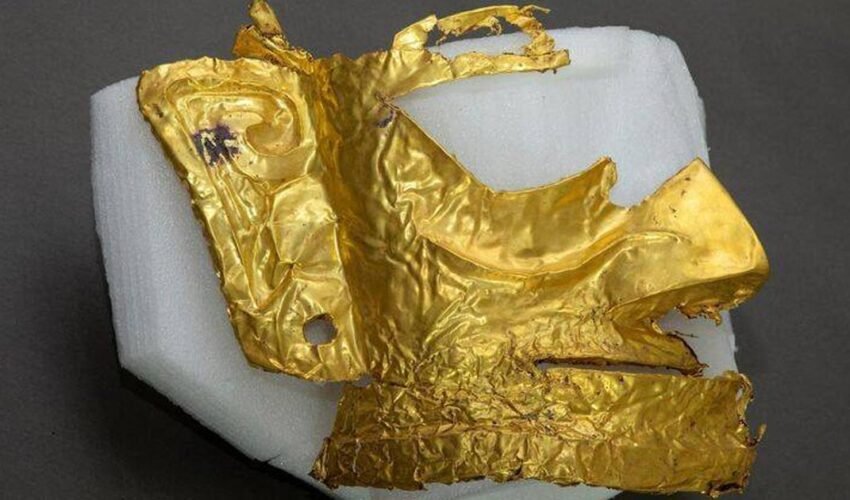 A group of archaeologists discovered a 3,000-year-old city that was lost to the sands of Egypt. The discovery has been…

In 1980, a team of loggers in The Georgia Kraft Corp. cut off the top of a chestnut oak tree…