Police in St. Paul, Minnesota, have inquired for the public’s support in locating the suspect in the attempted robbery of an 81-year-old woman. CCTV shows a man knocking the victim down and grabbing her purse at a Walgreens.

The woman was significantly injured in the attack, but officials said she was ‘tough’ and refused to give up her purse or the money inside.

Following an online appeal to locate the suspect, Isaiah Jamal Foster’s mother contacted police to alert authorities to her son, according to a police spokesperson.

Foster’s mother recognized the coat in the CCTV footage as a gift from his grandmother, according to reports.

She claimed he left the house wearing the coat and told officers, “I’m 100 percent sure that’s him.”

‘She does not trust police officers but wanted to do the right thing,’ according to the criminal complaint. She prayed about it before handing over her son. She loves her son, but did not raise him like that.’

Foster, 18, of Richfield, was already in custody in Ramsey County for a carjacking of a woman and her young child on December 28 and did not need to be found, according to St Paul Police.

In connection with the attempted mugging, he has been charged with first-degree aggravated robbery (attempted) and third-degree assault resulting in serious bodily harm.

Foster is still behind bars.

‘It started with a Facebook post asking for your help, led to a tip from a caring community member, and ended with an arrest and charges,’ the St Paul Police Department said in a statement.

‘Thanks to your help, our investigators were able to identify, locate, and apprehend the suspect in the attempted purse snatching/assault on an 81-year-old woman at a Walgreens on Larpenteur Avenue on Thursday, Dec. 23.

In connection with the case, Isaiah Jamal Foster, 18, of Richfield, Minn., has been charged with first-degree aggravated robbery (attempted) and third-degree assault resulting in serious bodily harm.

After receiving the tip, our investigator quickly located Foster in the Ramsey County jail, where he is being held after deputies from the Ramsey County Sheriff’s Office arrested him earlier this week for his role in the carjacking of a woman and her young child on Osceola Avenue.’

The Ramsey County Attorney’s Office told Mercury News that the carjacking case is still being investigated.

Foster was arrested on suspicion of armed carjacking a St Paul woman in her garage in the Crocus Hill neighborhood, five miles from the Walgreens store, on Tuesday with a 17-year-old and a 14-year-old.

He was in jail when his mother identified him as the man in the video stills from the Walgreens assault taken on December 23. 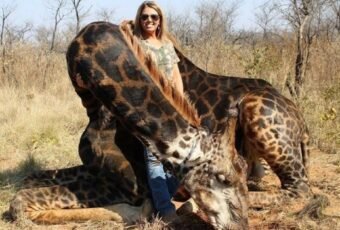 Tess Talley sparked outrage when she posed for a photo with a rare, black giraffe she hunted and killed –…