A Washington man serving time for a high-speed police chase found himself in the same cell as the convicted child rapist who had previously victimized his sister – so he killed him.

According to local reports, Shane Goldsby, 26, was sentenced to more than 24 years in prison on Tuesday for the murder of Robert Munger, a 70-year-old who was serving a 43-year sentence for his child sex crimes.

“You put me in the same cell as this dude. I feel set up. I’m the victim.”

Goldsby apologized to Munger’s family in a court statement, according to Spokane-based KHQ-TV.

“I cannot imagine what it would be like to lose a loved one in this manner,” he said in a statement. “I apologize to his wife and his entire family. I am deeply sorry, and I hope you are able to recover from what I have done.”

He told the news station that his discomfort at sharing a cell with a man who raped his sister turned into a rage when the child abuser began detailing his crimes in detail.

According to court documents, Goldsby became enraged and beat Munger unconscious from behind with punches and kicks, while surveillance cameras recorded the entire incident. Three days later, the victim died.

Munger was convicted of child rape, child molestation, and possession of child pornography in December 2019. Prior charges against Goldsby included stabbing someone, stealing a police car, and injuring a state trooper.

According to Goldsby, he has had more than 20 run-ins with correctional officers, which led to him being transferred to several facilities, including Airway Heights Correctional Center, where he became cellmates with Munger.

According to the Spokesman-Review, a Washington State Patrol investigation discovered that because of issues such as different last names for family members, prison staff were unaware the men knew each other when they were placed in the same cell.

The Department of Corrections described it as a “unfortunate and complicated incident.”

Munger, according to Goldsby, kept giving him “details about what happened and what he did.” Regarding the photos and videos of him doing this stuff, and how they were piling up.” Goldsby stated that he attempted to move to a different cell several times and informed prison staff that there was a problem.

Goldsby, on the other hand, claims Lady Luck was not on his side because he never intended to kill Munger. In fact, he believes that being assigned to the same cell as Goldsby has put him in an impossible situation.

“When I arrived in that unit, I walked out of that pod, went to an office, and said, ‘Hey, I need a new cellie,’” he explained to KHQ. Goldsby also stated that he attempted to use a call button to alert officers to a problem, but no one responded. “So, in my head, I’m not in my head at the moment. “I have a strong feeling that this is exactly what they wanted to happen,” Goldsby said.

According to the newspaper, the Washington State Department of Corrections stated that all protocols were followed in the events leading up to the incident.

The Spokesman-Review reported that when Goldsby was younger, he was placed in ten different foster homes after being rescued by child services from his drug-addicted mother, who would sometimes chain him outside. During his sentencing hearing for Munger’s murder, his lawyer stated that Goldsby reconnected with his mother years later and began using drugs with him prior to entering prison at the age of 22.

Goldsby was the first to admit he wasn’t a good person. In 2017, he was arrested for stealing a Kelso Police patrol car, leading law enforcement on a lengthy pursuit, and then colliding with a Washington State Patrol vehicle, injuring a trooper inside. He also claimed to have been involved in more than 20 fights with correctional officers during his time in prison.

Goldsby’s lawyer read a prepared statement during his sentencing hearing on Tuesday after he became overwhelmed with emotion and was unable to read the statement himself.

According to KHQ, the statement read, “I cannot imagine what it would be like to lose a loved one in this manner.” “I apologize to [Munger’s] wife and his entire family. I am deeply sorry, and I hope you are able to recover from what I have caused.”

The Washington Department of Corrections conducted an independent investigation and discovered that, while a cellmate policy should have prevented the two inmates from being in the same cell, “screeners had no knowledge of the connection between Goldsby and Munger when they were placed together.”

Goldby said he was ignored when he requested a different cellmate. “I wasn’t stable at that point. I wasn’t.

“I was getting to that point because (Munger) kept wanting to tell me about what happened, what he did – about the photos and videos of him doing this stuff.” It was getting worse.

“I was questioning what was going on, wondering, ‘Why is all this going on?'” But, as I previously stated, I surrendered my life to God in 2019. I stopped gangbanging. “I was doing well,” he said. 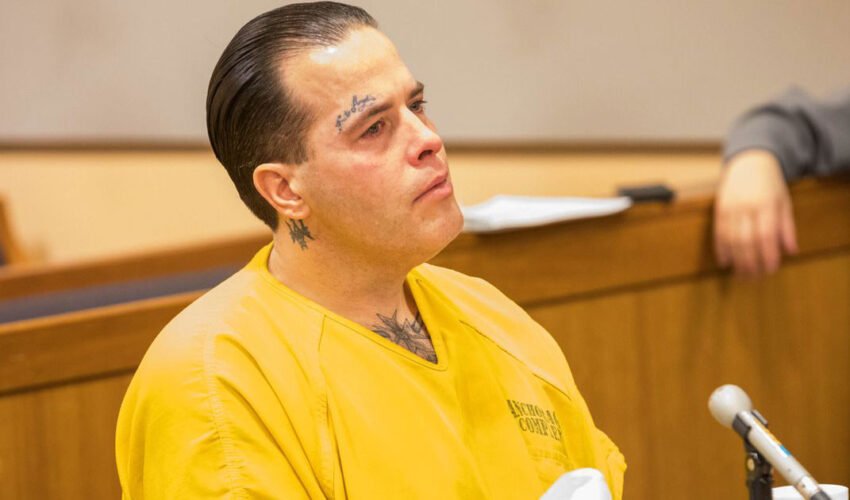