“During the Crusades, the Knights Templar battled for God, gold, and glory. Somewhere in the modern city of Acre lies their command center, and possibly their treasure”

The Knights Templar were among the most important Catholic military orders in history. The story of Knights Templar – Catholic warrior monks knows as the “crusading soldiers of God.” is a stuff of legends and it continues to be studied today. The rise to powers of Templates and their downfall is the subject of many studies.

Recently, researchers uncovered tunnels sprawling underneath the city as well as the guardhouse, which indicates how the Templar have moved their treasures from the post to their treasure tower. The network of hidden tunnels buried beneath the city of Israel, which is believed to have been built by the Knights Templar. However, the tower is buried under dirt and rock.

Historical relics left by the Knights Templar order have been unearthed over years of excavations, which were later disbanded by Pope Clement V in 1312 following conflicts between France’s King Philip IV and the crusading monks.

The Templar’s history is tied to the Holy Land and the Crusades, and it’s not surprising that the new documentary series by National Geographic called Lost Cities, is set in the city of Acre, a port in modern-day Israel. Which is also the base of operations of the fabled knights after their headquarters in Jerusalem was lost when Saladin conquered the city in 1187.

With the help of a new documentary, Lost Cities archaeologist and show host Albert Lin and his team utilize light detection and ranging technology known as LiDAR.

The Researcher believes that these tunnels may have connected the Knights Templar’s fortress with the city’s post, allowing the Templar’s to carry treasure safely to their treasure tower.

These warrior monks are the stuff of legend, and so is their gold,” Lin said in the documentary.” During the Crusades, the Knights Templar battles for God, gold, and glory. Somewhere in the modern city of Acre lies their command center, and possibly their treasure,” Lin further added.

The city of Acre was once controlled by the Knights Templar for more than 100 years after they lost their headquarters in Jerusalem to the Muslim ruler Saladin in 1187. After the recent discoveries, researchers suspect that the Templar’s gold could still be buried somewhere in these underground tunnels.

The Knight Templar monks were trained as skilled fighters with the objective of protecting and advancing Christianity through the means of warfare. The order was also successful in raising a huge amount of funds to fuel the Crusades.

The order left Acre city in 1921 when the city was lost and moved its headquarters to Limassol on the island of Cyprus. Within a decade later, their foothold in the region was gone, and after the complete loss of control of the Holy Land by the Crusaders, support for the military order began to wane and the Knights’ fortune turned.

When the King of France, Philip IV took power, the royal family was deeply indebted to the Templars, but the king decided that he didn’t have to pay back anything if there was no order.

On the other hand, a separate team of researchers in Cambodia recently uncovered a lost city of the Khmer Empire using LiDAR technology. The archeologists successfully uncovered the hidden city high in the Cambodian mountains using LiDAR technology. The researchers used LiDAR to map the archeological features hidden underneath Cambodia’s dense jungle.

With more and more LiDAR discoveries popping up around the world, we are sure to uncover more hidden treasures buried underneath the Earth’s surface – even though treasures might not be made of gold.

Read more from the website: Miners Stumbled Upon 110 Million-Year-Old Dinosaur ‘Mummy’ With Its Skin Intact

Although we know a lot about dinosaurs - how they looked like, what they ate, and what killed them, and… 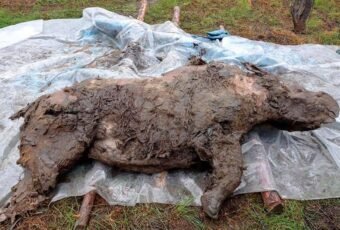 It is the best-preserved to date juvenile woolly Rhino ever found, with a lot of its internal organ its teeth,…